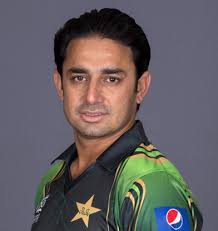 
Saeed Ajmal is a Pakistani right-arm off-spin bowler who bats right handed. He is one of the late bloomers who has developed into one of the most pivotal spin bowlers for Pakistan during the last couple of years. Ajmal announced his retirement from all forms of cricket on 13-November-2017, two years after losing his wicket-taking bite with a remodelled bowling action that was twice deemed illegal.

During a successful but controversial career, Ajmal was once celebrated as the world's number one bowler in one-day internationals (ODIs) and Twenty20 cricket.

He famously captured 24 wickets in three Tests against England in 2012.

Ajmal to retire from all forms of cricket

Jamieson six for gives hosts victory on day four [+]
Kyle Jamieson picked up 11 wickets in the match helps New Zealand to massive innings win and No. 1 on the rankings.

Pakistan bowled out for 297, Jamieson has five [+]
Azhar Ali made an assured 93 while Mohammad Rizwan made a counterattacking 61.