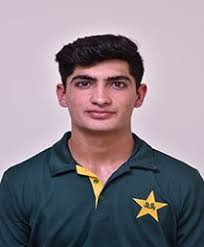 
Naseem Shah (born 15-Feb-2003) is a right-handed batsman and right-arm medium-fast bowler, who plays international cricket for Pakistan. He made his International debut in Test match against Australia at Brisbane on 21-Nov-2019.

Naseem Shah became the youngest cricketer to make Test debut in Australia when he took the field during the first Test of the two-match series at The Gabba.

Naseem, aged 16 years and 279 days, broke the record held by former Australia captain Ian Craig who had made his Test debut at the age of 17 against South Africa at the MCG in 1953.

On 9-Feb-2020, Pakistan teenager Naseem Shah grabbed a hat trick against Bangladesh Sunday to become the youngest person to record the feat in Test cricket.

Naseem, aged 16 years and 359 days, trapped Najumul Hossain Shanto leg before off the fourth ball of his seventh over, then followed up with dismissals of Taijul Islam and Mahmudullah with successive deliveries.

Bangladesh's leg-spinner Alok Kapali was previously the youngest to record a Test hat trick -- at 19 -- also against Pakistan, in Peshawar in 2003.

Naseem, who burst onto the scene on Pakistan's Australia tour last year, is also the youngest fast bowler and second bowler overall to take five wickets in a Test innings.

Salt helps England level T20 series in Pakistan [+]
Phil Salt smashes an unbeaten 88 from 41 balls as England storm to an eight-wicket win over Pakistan in the sixth T20I.

Pakistan beat England in low-scoring encounter [+]
Pakistan take a 3-2 lead in their Twenty20 series against England with a six-run victory in a low-scoring match in Lahore.

Hales, bowlers steer England to victory [+]
The visitors took a 1-0 lead in the seven-match series