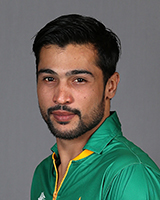 On 29 August 2010, he was implicated in allegations of spot-fixing and was given a five-year ban for allegedly bowling two-deliberate no-balls, Amir pleaded guilty on the verdict handed out by his prosecutor the International Cricket Council (ICC).

On 2 September 2010, after the warm-up List A game between Pakistan and Somerset, the International Cricket Council announced that they had suspended Amir under the provisions of the ICC's Anti-Corruption Code.

On 15 January 2016, he made his return to international cricket in a Twenty20 International (T20I) match against New Zealand.

Aamer and Salman Butt Must Wait For Verdict

Salt helps England level T20 series in Pakistan [+]
Phil Salt smashes an unbeaten 88 from 41 balls as England storm to an eight-wicket win over Pakistan in the sixth T20I.

Pakistan beat England in low-scoring encounter [+]
Pakistan take a 3-2 lead in their Twenty20 series against England with a six-run victory in a low-scoring match in Lahore.

Hales, bowlers steer England to victory [+]
The visitors took a 1-0 lead in the seven-match series